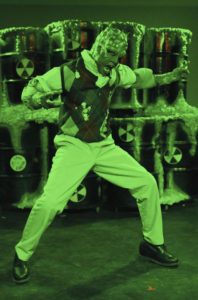 Looking for something fun to do?  Run to New Jersey!  What?  A little too far?  Have no fear – New Jersey is actually here on Freedom Drive, now through November 12th at The Actor’s Theatre of Charlotte (ATC).

Last night, Starneslord, Carol the Cat and I went to see The Toxic Avenger and had an amazing time.  In New Jersey. (I know, it’s rare you will see those 2 statements so close together.)

Based on the cult classic movies (yes, plural) – this musical has it all – love, drama, conflict, humor and lots of toxic waste.  Perhaps the most incredible part of it all is that the entire show, which keeps you smiling the whole time, is performed be only 5 actors.  The cast of characters seems like 4 times that which is a true tribute to the behind-the-scenes crew and performers who make lightning speed costume and personality changes.

Special hats off goes to Ryan Stamey and Matthew Johnson who were “the village” and just rocked all of their numerous supporting roles. (Matthew was the understudy for Dominique Atwater, who did not perform that night.) Lisa Hugo was equally impressive, especially when she played dual roles simultaneously in one musical number and varied not only her looks and actions, but her actual singing voice.

The 2 leads – played by Jeremy DeCarlos and Leslie Giles – were equally matched with their castmates and had splendid physical humor, comedic timing and vocal chops throughout the play.

This play was spellbinding in its minimized staging with maximum presence.  Due to complications outside their control, ATC  had to punt-kick their production to the Center City Church next door.  Never did we feel that this lessened the production in any way. We definitely rate it a solid A for comedic and musical entertainment.

Hurry to New Jersey while it is still here in Charlotte – their last date is November 12th.  For performance information, include buying your tickets, click here.

NOTE: If you intend to buy your tickets at the door, you may want to stop at an ATM first, as the were only processing cash door sales. Because the performance was in a church, no alcohol was served. They did have soft drinks and concessions for general snacking.

The Toxic Avenger is presented by The Actor’s Theatre of Charlotte.  Chip Decker directs, Dr. Bradley Fugate is the musical director, Tod Kubo was the choreographer, and Christy Edney Lancaster is the stage manager.  And our own friend of The Geeks, Carrie Cranford, was stagehand extraordinaire – assisting with props and quick changes like no one’s business. 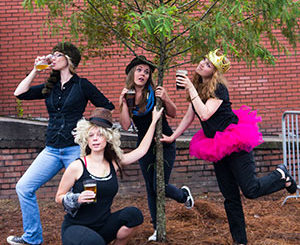 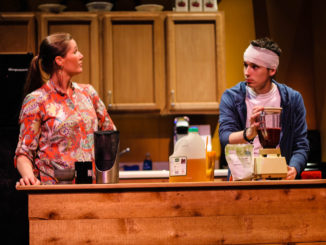 See The Seagull In A Whole New Light!