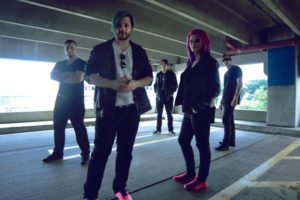 I first met the Something Clever Band back in the summer of 2015 when they were planning their first ever CleverCon at Tremont Music Hall.  Since then, they have continued to gain much respect and traction in the Charlotte and regional music scene (because they are awesome).  I recently had a chance to catch up with frontman Adam Nelson and lead guitarist Kelly Flusk to talk about their newest album release, Seasons of Light.

Here’s their first single off the album – give it a listen:

What was the inspiration for this album?

A lot of the material for the album were ideas that we wanted to release for years, we just didn’t have the right vehicle for it yet.  We wanted to do a double collection of ‘Season of Darkness/Season of Light’ to keep people interested in what was to come.  Originally Season of Light was going to be all positive uplifting tracks, but as time went on, we had tracks that didn’t necessarily reflect that but it grew into an ‘art imitating life’ situation, where not all the tracks were positive, just as not every moment in life is a happy one.  As dynamic as the record became, each track seems to suit the next in getting our point across that no matter how dark it gets, there’s always another side.

Here’s a video from their album release at The Underground:

What has been one of your favorite songs to work on?

They’ve all been great to work with in some form or another.  Each member will have different reasons for why one track stands out more than another…Snake Oil seemed to be our sleeper track where we didn’t expect much from it as the idea was formed, but as the track progressed it seemed to take on an entirely new life and ultimately that was why we chose it as one of our first singles.

For someone not familiar with your work, how would you describe your musical aesthetic?

I’d say even now we’re still trying to hone our sound, and will always be ever-evolving, but at the moment it seems that we’re straddling the line between arena-rock and metalcore, just because we want to zero in on a hybrid of what we listen to and what everyone else likes to hear.

What kind of musical project do you want to work on next?

That’s top secret 😉  All kidding aside, we’ve still got tons of ideas.  It feels like with the Season of Darkness/Season of Light projects finished, we’ve spent years building this playground, and now it’s time to play in it.  The next effort could be tremendously different, but we’ll still acknowledge the sounds that garnered our fanbase.  One thing we’d like to bring back is CleverCon….a rock show blended with Comic Convention attributes to help reach our nerdy demographic, because that’s another interest that most band members share is sci-fi, anime, comics, and video games.

When your not performing music, what else are you up to?

At the moment, all working day jobs, bleh!  Lol.  But Kelly and I are heavily addicted to Zelda:  Breath of the Wild, so we’ve got that going for us, which is nice.

Where to find Something Clever Band on the Interwebz