Hannah and Olivia Redlich, aka The Redlich Sisters, are a local favorite of the Carolina Rennaisance Festival with their incredible Irish dancing.  They are also popular with many other festivals and performances in the area.  But they don’t just dance – they sing, they play musical instruments, and they even make Youtube videos.  You may have seen Hannah’s “Hamilton” video – which went viral, especially once show creator Lin-Manuel Miranda saw it, loved it, and tweeted it out.  Now they’re back with a mesmerizing cover video of No Diggity/Shape of You – that includes multiple rhythmic tap tracks and Olivia on ukulele. You can check out both of these videos and 2 more here:

Recently, Hannah and Olivia were kind enough to take a few moments to answer questions about their dancing, next moves, and more.

When did you first get in to dancing?

Hannah (H): I started dancing nearly 14 years ago! As a toddler, I was obsessed with Riverdance. While my friends played various Disney movies on a loop, I drove my parents mad with Michael Flatley’s glorious creation. Olivia and I used to reenact our favorite dances in the living room. I still remember leaping over rugs and through the kitchen, proudly sporting a little green dress that reminded me of Jean Butler’s. One St. Patrick’s Day, we saw the Connick School of Irish Dance in a parade… the rest is history 🙂 I competed for about 10 years, reaching the Open Champion level. I’m so thankful for everyone who helped me pursue this passion of mine!

Olivia (O): I started Irish dancing when I was 5 years old.  My favorite part of Riverdance was when Jean Butler would dance out of the butterfly wings, so we tried recreating that scene many times. I competed throughout the Southern region until I reached Open Champion.

How did you first get involved with the Carolina Renaissance Festival?

O: We got involved with the Renaissance Festival through my seventh grade theater teacher, Chip Caldwell. He was head of the children’s troupe, “The Alleyn Apprentice Players” We played out different scenes, sang songs, and Hannah and I danced. We ended up getting pulled away from the troupe when Hannah and I started collaborating with many of the musicians that worked at the faire. That’s when we started focusing on performing rather than competing.

Do you perform with any other festivals?

H: We like to busy ourselves with as many performance opportunities as we can manage! We perform at festivals year-round including various Highland Games. Of course, our favorite thing to do is perform with a live band! We’ve had the pleasure of making friends with some incredibly talented musicians. It’s always a pleasure when they invite us to dance alongside them.

O: We also perform at many different celtic festivals around the Carolinas. We have danced at Latta Plantation’s Celtic Festival, the Loch Norman Games, Tartan Day South, etc.

What inspired you to start creating videos?

H: When I was about 15, I first developed an interest in filmmaking. I feel that mass media, specifically film and television, are some of the most pervasive and influential mediums around today. I’ve come to realize that the stories we tell are important– and the way that we tell them are even more so.

I started teaching myself the art of videography. First, by borrowing (….more like commandeering….) my dad’s hand-held camcorder. It still recorded on digital tape and was nowhere near HD…. a tedious learning experience, but worthwhile! I also helped a friend of mine create little comical YouTube skits.

One day, I had a “strange” idea…. what if I melded my two interests? Why not create dance videos?? But, not just any dance videos….. I wanted to “think outside the box” with creative themes and ideas. Thus, my first video ideas were spawned. My early work is still viewable on YouTube, though they’re quite embarrassing now! It’s fun to see where you started, though… it gives you hope for continued growth as an artist!

What parts of the process do you work on?

H: I love all aspects of video making! I conceptualize and choreograph, adjust camera settings and lighting, edit the footage, and (of course) dance! It’s a difficult task, attempting to be both behind the camera and in front of it (Kudos to M. Night Shyamalan!), so I’m hoping to create a few narratives where I can focus my efforts behind the scenes. I’m so thankful to my parents, who often help me film!

What has been one of your favorite projects to work on? What project do you want to do next?

H: Of my personal projects, the Hamilton video was certainly a fun one! I was so excited about the idea when I first dreamt it up! I have to give some credit to my mother, though…. she’s the one who really pushed me to get it done. I’m such a perfectionist, sometimes I sit on ideas thinking I don’t have the means of making my vision come to fruition. She motivated me to film it as soon as I could and release it while the Hamilton musical was still highly popular. I actually wanted to re-film it, but decided to post it as I was leaving town for the summer….. I’m glad I did!

I also had the honor of working as the digital loader on a feature film over the fall/winter. It was such a fantastic learning experience! I can’t wait to work on more features in the future….. and, hopefully, direct one of my own some day!

As for next projects…. I always have multiple ideas on the backburner. Currently, I have 4. 😉

What did you think when your Hamilton video started going viral?

H: I have a video of my sister and I screaming and jumping when Lin-Manuel Miranda shared it…… I’ll have to send it to you. It pretty much sums up our emotions! I just remember feeling so grateful to everyone who helped it go viral! Having such supportive friends and family is a true blessing!

In your most recent video, you also sing and play instruments – can we expect more of that in future videos?

H: Welp, the response has been pretty good….. so, I suppose you can expect more! My sister and I don’t sing often, so we were actually really nervous to post it. Olivia inherited all the musical aptitude in the family and is incredibly talented, so she’ll certainly be making more appearances!

O: We haven’t come up with any more ideas involving my ukulele or singing just yet, but I’d say you can expect another video like it. The filming of our last video was so much fun and different from what people are used to seeing us do.

When you’re not performing, what do you do for fun?

H: I love to be creative and devote as much time to art as I can afford! I’m a painter, writer, and leatherworker. …And…. I’m a proud geek! I love watching LOTR whenever my family lets me hijack the television.

O: Most people didn’t know I liked playing the ukulele until we uploaded our last video. I grew up dancing, not playing any instruments or singing, so it’s nice to try something new. Also, my “crazy-cat-lady” side spends a little too much time looking at “cats of Instagram” 😉

Where can we go see you perform next? 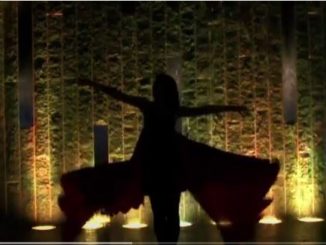 Hannah Redlich’s Going to Mars – Are You? 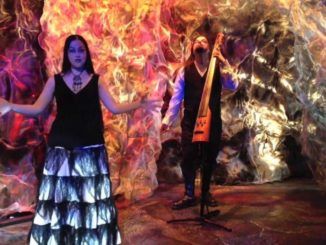 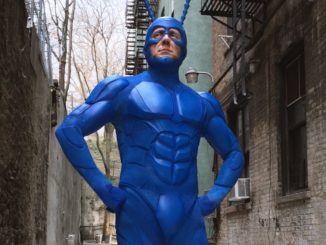