On June 10th, Mikey Mason launched the kickstarter for his second studio album, Barbarian Jetpack. As a returning musical guest for our annual Geek Gala, I invited Mikey to share with us a bit about what songs were definitely on the album, what songs might be on the album, and a few new songs he’s working on (one which I’m sure a few of our Charlotte Geeks would be very excited about. I know *I* am!) Here, in his own words, I give you – the mind of Mikey Mason.

I live in Indiana and I’m a Charlotte Geek. How cool is that? I would’ve said “honorary Charlotte Geek” but someone (either Micki or Toni or Joey―can’t remember cause there was too much awesome going on at ConCarolinas) made the comment that I attend more Charlotte Geeks functions than some of the Geeks who live in Charlotte! (That made me laugh, but don’t worry―I’m not judging. It’s probably easier for me because of my job… Also, there are quite a few Charlotte Geeks that have turned into not only an awesome group of cheerleaders for the silly things I do, but also a great bunch of friends. That pushes me a little, too.)

Anyway, I’d mentioned at ConCarolinas that I was about to launch a Kickstarter campaign to fund the recording of the second album. Joey thought it might be a good idea to outline some of the songs I was considering recording on the album, and I love to talk about myself, so I’m gonna do it. Some of these songs will absolutely be on the album, some of them are up in the air. In any case, here is an advance “special features” peek at the material I’m working with/on right now:

These four songs WILL appear on the album:

Steampunk Enough Is a song that had a brief appearance on YouTube, and has been played at a few shows, as well. If you haven’t heard it, it plays with a couple of different themes: the major, overarching theme being that of Steampunk as an insular community of elite costumers―a stereotype, I know, but this is comedy we’re talking about. The minor theme is about the extreme measures some people will go to for love, and about how changing who you are in order to suit someone’s ideal only really ends in a loss of your own identity. I’m intending the studio version of this to be a bit more rock sounding than the YouTube version.

Han Solo Cool A song about both our idols and how we waste time and pass up chances by not emulating the qualities we most admire in them. “Life would simply rule, if I could be Han Solo cool…” This made its debut at ConCarolinas, and will also be considerably more rockish than you may have heard there (as I tend to do acoustic sets.)

Best Game Ever The ultimate gaming story about “that guy” at your gaming table and that one night when your group finally just kills his character. Over and over. And over. This will remain fairly true to the youtube version, but will likely have additional instruments, an additional (electric) guitar perhaps, and I know a cellist…

Someday A simple geeky payback song about remembering every ill thing someone ever did to you and vowing revenge on your own terms (and without violating any laws.) When this song made its debut, one gentleman referred to it as “Bill Gates’ Lament.”I may use that as a subtitle. Maybe not.

The following songs MAY appear on the album:

Another Dick Joke Song A song about the frustrations of being a comedian who thought he’d be able to grow and expand his comedy into areas of social issues and his innermost thoughts, but ends up trapped in the position of telling dick jokes every night in order to make a living.

White Trash Geek – One of the only crossover songs from my regular comedy act. This is essentially a parody of my own song, King Of The White Trash, but is adapted instead to show how I am both white trash and a geek. Very rockabilly/southern rock.

C Is For Corpse Camp – This is a parody, and as such, probably won’t make it onto the album. But I like it, so who knows? It’s a parody of ‘C is for Cookie’ in which Cookie Monster relaxes after a hard day at work by drinking martinis and pwning n00bs on World Of Warcraft. This was written as a reward for the Impotent Nerd Rage album’s Kickstarter campaign.

Summer of 83 – Parody of ‘Summer of 69’ in which I explore the introduction to RPGs, the Red Box D&D set. Again, I don’t normally want parodies on my albums, but I also really like this one…

Cylon Song – This is a song about being on the receiving end of an intervention with your girlfriend’s family and slowly discovering you’re a Cylon. This was also written as a reward for the Impotent Nerd Rage album’s Kickstarter campaign.

These are unfinished songs I am working on, which MAY appear on the album:

(Goonies) Never Say Die Here’s the chorus: “Me and One Eyed Willie have been talking this thing out. We’ve been pondering life’s mysteries, what is it all about? And when the world teams up against us, we look it in the eyes, and dive in head-first, screaming, “Hey, you guys!” Cause Goonies never say die!” ‘Nuff said. This will probably make it on. I love the chorus.
8 Bit Love Song A love song from Mario to Princess Peach. Not so much funny as it is catchy and sweet and wistful. If this makes it on, there will probably be a BitCore element to it, although it is primarily a pop rock song.

Scoobythulu A song about an evil genius who swears revenge on the Mystery, Inc. gang and summons the elder gods in order to extract his revenge. Kind of disturbing. Involves tentacle sex and Velma wearing Daphne’s skin like a mask in a ritual to stop the elder gods…

Barbarian Jetpack This is actually set to the tune of the song in the Kickstarter video, or at least the first version of it was… It’s a twisted song about the space-time continuum and a seemingly anachronistic Barbarian Jetpack with some interesting modifications. This will probably make it on the album.

Night of the Living Geeks A song about Halloween and how it’s really the geek’s night to shine. This is being written for the 2012 Geek Gala.

I’m also toying with a couple of ideas right now: ‘Biff, Bang Boom!’ is about how when two male superheroes meet in a comic, they almost always fight, possibly due to homoerotic tension, and ‘Save vs. Stupidity’ is an idea I have for another RPG-themed song.

For right now, that’s all I’m willing to divulge. There are a few more ideas, but nothing I feel strongly enough about (right now) at least to say they have a shot at making it on the album.

I hope the songs preview piqued your interest, and I hope you’ll help support the album in every way you can, be it via financial support, by boosting the signal and spreading the word, or both! Thanks, and I’ll see you at the Geek Gala (if not before!)

For more about Mikey Mason, the comedy rock star, be sure to visit his website www.MikeyMason.com – in the meantime, here’s a few of his videos for you to enjoy! 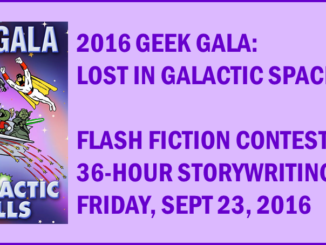 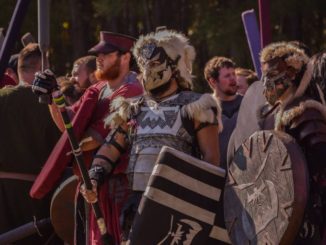