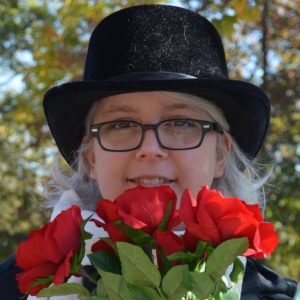 Cindy Sites-Wooley is a copywriter/editor by day and a founding editor of Tangents Magazine by night. She also writes poetry and has done readings in the Charlotte area. Her obsessions include Doctor Who, cats, and forever the 1980s.

In the not so distant past*, we had a chance to ask Cindy 5 questions, and we are happy to share those answers with you now!

(*To quote the Doctor: “People assume that time is a strict progression of cause to effect, but actually, from a nonlinear, non-subjective viewpoint, it’s more like a big ball of wibbly-wobbly, timey–wimey… stuff.”)

How did Tangents originally get started? What was the impetus for bringing it back?

When I was the entertainment editor for the University Times student newspaper at UNCC in the early ’90s, I had some disagreements with the head of student media. I’m not the best with dates, but sometime in 1994, Carl Fulmer started writing for the Times and I was his editor. We decided that we’d be better off doing our own magazine, so we could have editorial control. Along with Dann Dunn from the video department of student media, we started to organize meetings to brainstorm and recruit writers. Lewd and Daniel Coston both came into the group early in the process. Staff and contributors came and went, but the core staff consisted of Carl, Lewd, Daniel, and me.

Are you looking for submissions? What kinds?

We’re always looking for submissions. Articles with a Charlotte focus, local music reviews, fiction, poetry, art, and photography are welcome. We don’t have a lot of rules about content, as long as we like it and you’re not doing anything that will get us in trouble. It doesn’t matter if you’re already published. Email [email protected] with your ideas or submissions.

What most excites you about the current or upcoming issues?

In our September issue we paid tribute to Lupie Duran, the owner of Lupie’s Cafe, who had just retired after working for decades in the restaurant business. It’s our way of paying tribute to her for creating a place that’s dear to all of our hearts, especially since so many of our past and recent planning sessions have happened there. I can’t even tell you how many plates of Throw Down Nachos with Cincinnati chili we consumed back in the ’90s. That article is one of my favorite things we’ve done since we brought the magazine back.

Our November issue was a chance for us to lampoon our state government.

Where can someone find copies? Will there be digital versions?

We have a list of all our distribution spots here!

Our website is tangentsmag.com, and you can find even more articles, art, and photos there. All the photos and art that we have to print in black and white are available in their brilliant, full-color glory on the website.

Our current issue is available in digital form and can be downloaded by going here: No April Fools

As a Doctor Who fan, if you had a TARDIS, where would you like to travel to?

On the 4th of June 1976, the Sex Pistols played at the Lesser Free Trade Union Hall in Manchester, England. There were only a few dozen people there, but several of them went on to form some of the most brilliant British bands of the punk and postpunk era: the Buzzcocks, Joy Division, the Smiths, and the Fall. That’s a big chunk of my music collection, so I’d be overjoyed to be in the same small room with those legends before they knew what they would go on to do.

How to find Tangents on the Interwebz